What Is Globalization’s Future?

What is the future of globalization? Is it Globalization 5.0, virtual nationalism or something else? For answers, we turn to the World Economic Forum’ (WEF) whitepaper titled Four Futures for Economic Globization.

The introduction of the Four Futures of Economic Globization is full of not-so-positive descriptive words about the current state of globalization and the challenges we’re facing – most of which we’re created. However, it’s essential to not let a few words describing unprecedented events put off reading the whitepaper right through until the end.

Globally we’ve known for some time of the convergence of issues that left unchecked and with no clear plan on how to deal with them will have devasting consequences for life on earth. What events are competing for our attention and resolution right now?

The pandemic revealed our overreliance on just-in-time supply chains and interdependent economies. Plus, globalization has created some wins with organizations outsourcing processes to developing nations and thus creating jobs and rising income levels. However, the distribution of wealth is unequal, and dirty production has been dumped in poor countries.

DW say the global share of trade peaked in 2008 then there was the GFC and Great Recession in which trade has either plateaued or dropped. 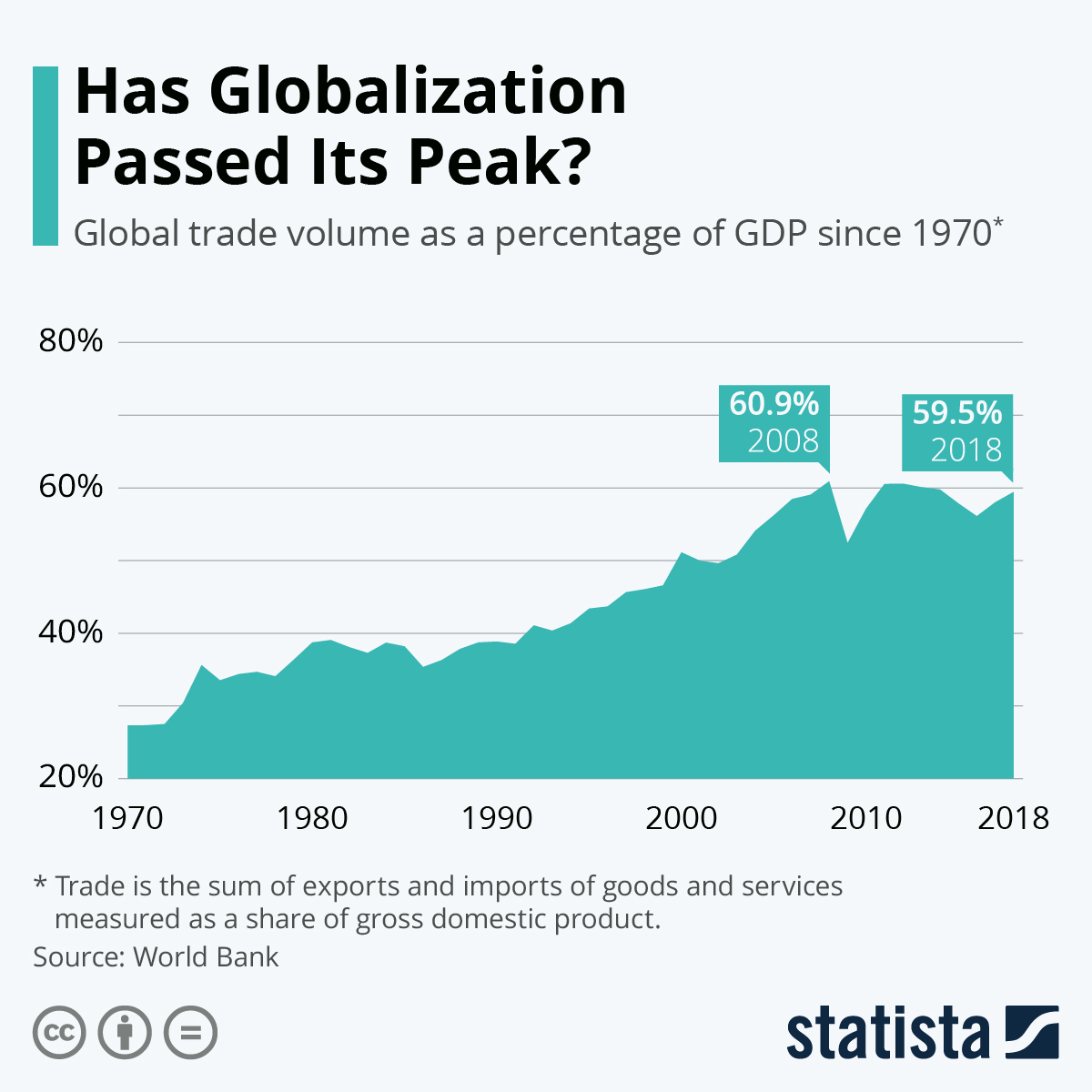 A rise in protectionism has seen some nations gradually shift away from global collaboration and frameworks to solve global issues collectively. Some nations have changed policies and have chosen to go it alone with their own agenda to manage security, sustainability, and economic disruption.

However, there is less focus now on just physical boundaries due to the rise of virtual economies.

The convergence of virtual and physical economies and accelerating digitalization have created new political and economic rivalries for the control of technologies and networks. Hence the uncertainty of the future of globalization.

Reverting back to the WEF whitepaper and it’s focus to conversations on what globalization may look like with different scenarios what they call four futures including the following:

Reconnecting or mutual collaboration of Governments committed to frameworks designed to solve global problems is Globalization 5.0. However, for this future to happen, there must be a paradigm shift for some nations who keen to go it alone.

If global cooperation does find its way, then look forward to sharing more of the new technologies of Industry 4.0. The accelerated adoption of blockchain, digital currencies, AI, Fintech, Edtech, Healthtech, Greentech, and so on, managed with international data policies, will excite global businesses.

Workforces will be more global, too, with remote working and project-based assignments, i.e., more freelancing, enabling incomes derived from global sources. Plus, before long hybrid workers will become the norm.

Globalization 5.0 will have challenges as rapid digital adoption leaves many businesses behind. However, the sharing of global challenges is arguably the best outcome for stability and peace.

However, the world will look very different should any of the three other possible paths of globalization occur, including from scenario 2 – Analogue Networks – virtual nationalism from WEF’s Four Futures of Economic Globalization whitepaper.

The likelihood of virtual nationalism is increased by the growth in distrust and the demand for control.

Governments are already attempting to exert more control over technology and online networks. Some countries have laws that often clash with the laws of other nations and are discordant. In a climate of distrust, IT companies, especially those with worldwide digital platforms, will find it difficult to function.

Protectionism will also induce manufacturers of electronics, drugs, and electric vehicles to concentrate on regional markets where trade is easy. While some countries stagnate and manage with fewer resources, skills, and investments, other areas progress more quickly throughout time, thanks to high-tech and talented workers.

Because countries tend to focus inward and only worry about what they can control, vulnerable nations will suffer the most.

There will be a lack of common commitment to global issues like climate change, health, and education, and innovation will also be regionalized. Expect to see a bigger gap between affluent and poor countries.

The third scenario concerns the domination of the digital economy and universal worldwide digital platforms. There will be a surge of worldwide tech-enabled collaboration, and all services will be provided “as a service.” The drawback of speeding digital adoption is that not all countries will stick with it.

The main difficulty for emerging countries is keeping up, so they are not left behind. Additionally, increased demand for extractive resources will lead to a power struggle that will only benefit the bigger local economies.

In this scenario, business is dominated by Industry 4.0, which some countries see as a danger since powerful tech companies have the power.

Are you prepared for scenario four, which involves a systemically fragmented Autarkic World?

Systemic fragmentation in the Autarkic World

Everyone is out for themselves in this situation. Thus self-sufficiency is key. However, no nation has ever managed to do it. Additionally, smaller countries would never attain it and suffer the most in an autarkic world since they depend on exports and global supply networks. Small local economies with sparse populations face challenges from trade restrictions and a decline in cross-border capital and investment flows. Be prepared for corporate bailouts and an increase in the nationalization of critical sectors, such as utilities and datacoms for security.

What do the four situations suggest to you? To fully understand the potential outcomes for each scenario, read the whitepaper.

Recent occurrences like influenza and the conflict in Ukraine have hampered supply chains, driven up costs, and instilled dread in almost everyone. According to the DW article, offshore should be switched to onshoring or nearshoring. A reduction in the need to rely on suppliers from countries with different ideologies.

What will happen to globalization in the future? Nobody knows. Prepare for the worst, hope for the best, as a great person once remarked.

Benefits of a VoIP Phone System

No Result
View All Result

No Result
View All Result

© 2021 smeresourceblog.com - We are the premier website for business engaging content, focused on helping business owners and decision-makers launch, build, and expand their businesses.